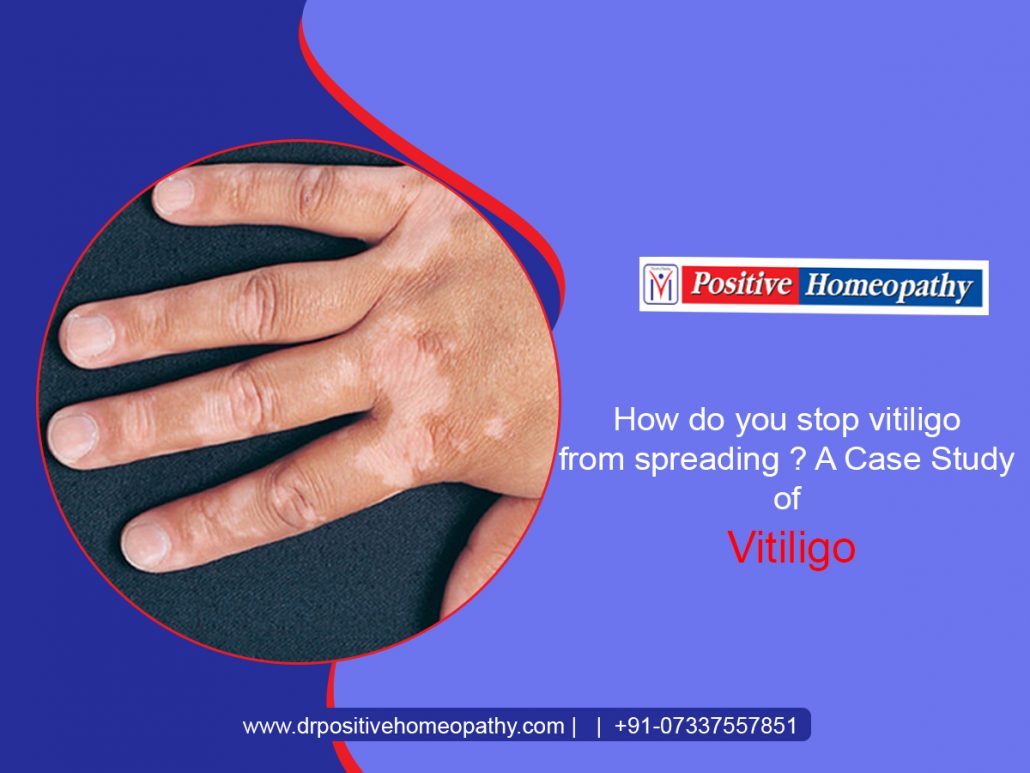 A seven-year-old child came to the clinic with white patches on his face without any symptoms of itching or burning. The patches were increasing and the parents were worried as it was affecting the appearance of the child. On examination, it was diagnosed as Vitiligo. Learn more about vitiligo treatment in homoeopathy in this article.

Vitiligo or Leucoderma is an autoimmune disorder in which skin loses its pigmentation in patches due to loss of melanocytes (cells responsible for the color of our skin, hair)in some areas. It can be widespread affecting many parts of the body or may be localized to a small area of skin. Depending on the extent of lesion, distribution and the number of white patches it is categorized as

Generalized Vitiligo: in which depigmented patches occur diffusely on many parts of the body. The patches may be symmetrical and mostly occur on the limbs and face. It is further subdivided into:

Localized Vitiligo: in which melanin is lost in a particular area of skin.  It may be

Etiology and Pathogenesis– It is multifactorial, a polygenic disorder with complex pathogenesis that is not yet well understood. Various theories of disease pathogenesis the most accepted is that genetic and non-genetic factors interact to influence melanocytes function and survival, eventually leading to the autoimmune destruction of melanocytes.

Autoimmune Hypothesis: Humoral immunity was first implicated on finding circulatory anti melanocytes autoantibodies that target the various melanocytes antigens including tyrosinase and it’s related proteins and also have the capability to kill melanocytes in vitro and in vivo. Currently, these autoantibodies are thought to reflect secondary humoral responses to melanocytes destruction rather than a primary factor of Generalized Vitiligo.

An essential biochemical finding in elevated levels of H2O2 in affected regions of epidermis. That may be caused in part by reduced enzymatic antioxidant capacity of keratinocytes and melanocytes.

Age– Though vitiligo can affect persons of any age incidence of vitiligo is more in young adults and those below the age of forty years.

Gender– Both male and female can be equally affected

Family history– a positive history of vitiligo or any other autoimmune condition like rheumatoid arthritis, psoriasis increases the risk

Trauma– like sunburn, burns due to chemicals, injuries, cuts, etc.

Presence of other autoimmune disorders

Clinical Features: The principal clinical manifestation of Vitiligo is the appearance of acquired milk white macules with fairly homogenous depigmentation and well-defined borders. Though the patches can occur anywhere in the body but commonly hands, legs, face, groin, area around lips, the oral cavity is commonly affected. The patches are non-contagious and usually asymptomatic i.e. they do not cause any itching or burning sensation.

How do you stop Vitiligo from spreading?

Vitiligo being autoimmune disorder there is no complete cure in a conventional system. Cosmetics, phototherapy and other treatments can help only to some extent and may help to camouflage the affected area but do not stop the destruction process of melanocytes. Homeopathy, on the other hand, can help to control the autoimmune process and stimulate the production of melanin. Vitiligo treatment in homeopathy and its medications are selected & based on the individualizing process by a careful and thorough case taking.

Case Study: The child when brought to the clinic was examined by our doctor. A detailed case taking was taken with the help of the parents. The child was the second live birth for the parents. Before the child was born to mother had 2 miscarriages. The child was born by C section and from the time of birth, the child appeared to be having a cold. He was prone to frequent cold and cough. He was more attached to his parents and seldom went to any strangers. He wanted to be always carried around by his parents and whenever sick he used to be very irritated and cranky.  Based on his history and other symptoms a dose of Antimonium tart 200 was given and he was on regular follow up. In three months’ time pigmentation began in the white patches.