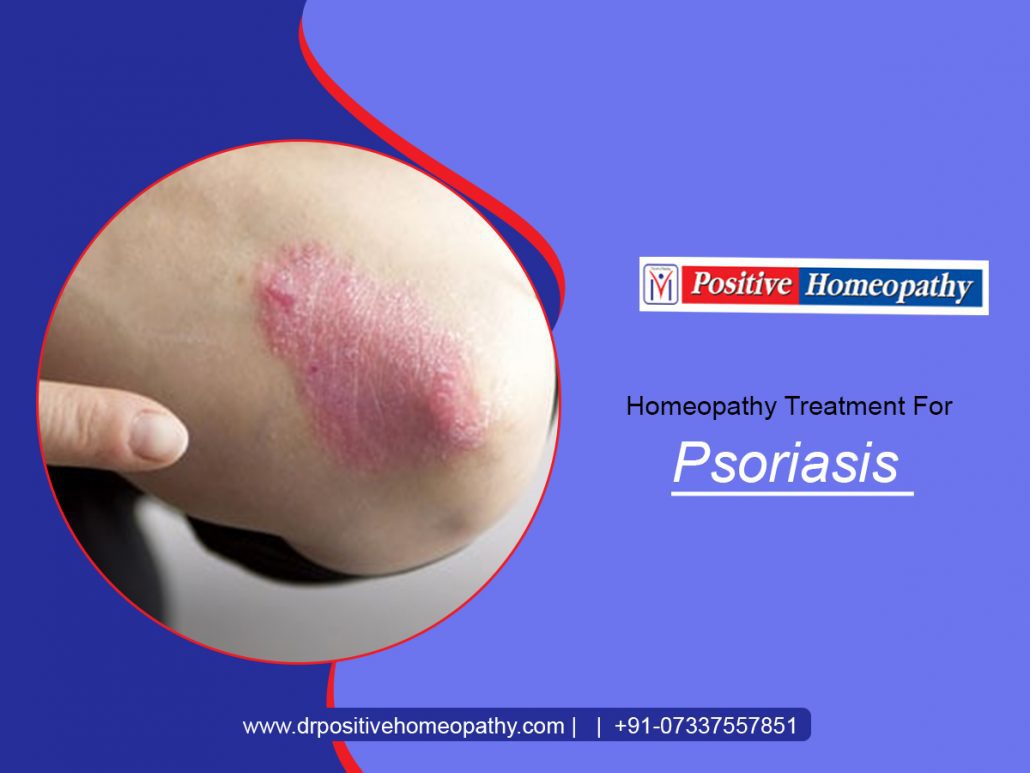 Psoriasis is derived from the Greek word Psora meaning itch or rash. In ancient times till a few decades back it was known to be a type of Leprosy but with the advancement in medicine, it has been identified as a separate entity and is now considered to be chronic inflammatory dermatosis. Learn more about homeopathy treatment for psoriasis in this article.

It is a common skin disease characterized by thick white or red silvery patches on the skin. It is genetically inherited autoimmune disorder which means it is developed by overactivity of our immune system. Primarily it affects the skin of Elbow, Knee, scalp but later it may affect other parts of the body such as nail& joints. It can affect a person of any age and gender. As per WHO prevalence of the disease ranges between 0.04%-2.8%in Indian population.

Psoriasis is a multifactorial disorder. The major causes are:

Though the above are the primary factors for the cause of Psoriasis but triggering factors are many. The common trigger factors are:

Psoriasis was originally considered as a Hyperproliferation of epidermal cells. However, immunomodulating therapies conceptualized Psoriasis as a genetically programmed inflammatory skin disease. The normal life cycle of skin cells is 28days but in psoriasis, the disturbance in the immune system affects the life cycle of skin cells by which they multiply much faster than normal. When these cells reach the surface and die, raised, red plaques covered with white scales appear. Psoriasis begins as a small scaling plaque initially but when multiple papules coalesce they form scaling plaques. These plaques tend to occur in scalp, elbow, and knees.

There are 5 types in Psoriasis

1.Plaque psoriasis: This is the most common type. It is characterized by thick, red patches of skin often with silver or white scales. Patches are usually 1-10cm in wide and commonly appears in Elbow, Knees, Lower back & scalp.80% people with psoriasis have PLAQUE PSORIASIS.

2.Guttate Psoriasis: It is the 2nd most common type. It appears as small red spots on the skin.10%people with psoriasis have this type. Its cause is bacterial which is most commonly associated with common cold hence it is usually seen during childhood& young adulthood. The spots appear as small separate drops shaped. They often appear on torso& limbs.

3.Inverse Psoriasis: It often appears in skin folds such as under breasts, armpits and groin region. The spots are red, smooth& shiny. The sweat & moisture from the skin folds aggravates shedding of skin scales.

4.Pustular Psoriasis: This is a severe form of Psoriasis. It develops fast in the form of white pustular eruptions around the red skin. It mostly affects isolated parts hands & feet. While the pus is non-infectious it causes Flu-like symptoms such as Fever, Chills, Rapid pulse, Muscle weakness, Loss of Appetite.

5.Erythrodermic Psoriasis: It is a rare type which looks like severe burns. The condition is serious and can be indeed a medical emergency. This type of Psoriasis covered a large portion of the body forms widespread red, scaly spots.

Homeopathy is an effective mode of treatment for Psoriasis. It is a system of medicine which is based on the individualization of the patient. Homeopathy believes in treating “MAN IN DISEASE, NOT THE DISEASE IN MAN “.The homeopathic remedies do not suppress the skin condition, rather the medicine intends to correct the cause of psoriasis by strengthening the immune system. Through constitutional treatment in homeopathy Psoriasis flare-ups, complications and reoccurrence of the patches can be stopped, providing management and cure for Psoriasis.

According to our master Hahnemann ‘s 1st& 4th Aphorisms “The Physicians mission is not only to give relief to the patient but also to restore his health. The physician should know about the things which derange his health and how to remove them from him” before homeopathy treatment for psoriasis, every physician should know about Diet & Regimen for the patients. Diet also important for treating Psoriasis as mentioned below:

Mr. Raj*(PT id-T2-1507446580), a 22-year-old male patient came with complaints of thick, white round patches around red skin over both backs of elbow, knees & trunk of the body. He complained of severe itching over the patches which aggravated in night and cold weather. The itching was so severe that he has to scratch until it bleeds causing a severe burning sensation which was relieved by taking warm water bathing. He had previously taken allopathic treatment for one year but there was not much relief. He could not reveal much about his family history. On detailed case taking and observation, he was found to be very anxious and was fearful that his disease is incurable. As he was lean, dark complexioned and anxious a single dose of Arsenic album 200 was given. His anxiety decreased though there was not much change in his skin condition. The medicine was continued for 2 months and he was progressing well but suddenly there was an acute flare-up. On review the patient confessed that recently he broke up with his girlfriend. Due to acute flare up, his sensitive nature and grief over lost love a single dose of Natrum Mur 200 were given. The itching reduced and skin started improving and the patches began to disappear. At the end of 3 months, his skin was almost normal. Inter currently nosode Psorinum 200 was given to prevent reoccurrence. It is now two years since he stopped the treatment and there has been no relapse.

By Dr A M REDDY
Tags: Homeopathy Treatment For PsoriasisHow To Get Rid of PsoriasisPsoriasis Treatments