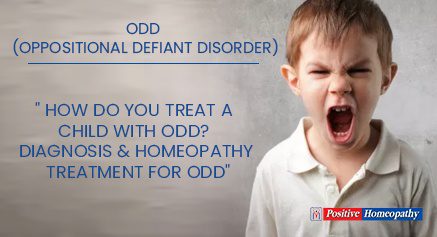 “Doctor, Please do something”, cried Mrs. Sharma*.  She was describing her child’s behavior. He was a lean, fair teenage boy. Even as she was speaking we could observe that the boy was constantly squirming in his seat and his expressions were changing. Two three times he even got up from the seat to exit the chambers and was forced by his father to sit. Generally, adolescent age children are rebellious and prone to mood swings but the parents narrated he was very aggressive, uses abusive language and beats his mother and other children. He cannot bear a slight contradiction. If stopped from doing any activity or denied giving any object of his desire then all hell breaks loose. He would clench his teeth in anger, his face would become flushed, and he would throw a fit of anger but later repent. And it was a daily affair. Complaints from school were increasing and he was assessed to be having Oppositional Defiant Disorder. Learn more about homeopathy for oppositional defiant disorder in this article.

It is a behavioral disorder characterized by a combative or aggressive behavior displayed by frequent anger outbursts, defiance and disrespectful behavior. It is most commonly found as a comorbid with Attention deficiency hyperactive disorder (ADHD). The cause for ODD is not known clearly known but the factors leading to other behavioral disorders like genetics, environment or sensitized immune and nervous system could play a role. Trigger factors could be stress, hormonal changes, and substance abuse.

What are the symptoms of ODD?

To be diagnosed as ODD the symptoms should be persistent and present for at least six months. The common symptoms displayed by the affected are:

Homeopathy Treatment: is given based on a personal constitution. By the constitution, it means a person’s mental, physical, likes, dislikes, emotions, dreams, sleep pattern are considered and a suitable remedy is given. The homeopathy medication helps to tone down the aggressiveness, restlessness and violent outbursts without any side effects like drowsiness, gaining weight, etc. Given below are few homeopathic medications which may be helpful in ODD behavior.

Anacardium Orientale:  An excellent remedy for persons with behavioral disorders. Abusive, slight causes make him extremely angry. There are unsocial; can be willful, cruel and malicious and can do bodily injury without any feeling.

Capsicum: It is well suited to very obstinate children. They take offense to trifles. Extremely peevish mentality. Even in the midst of joking, he becomes angry from the slightest cause. Always on the lookout for insults. Even if want something if proposed by another they would oppose it.

Chamomilla: A chamomilla child is exceedingly irritable and fretful. Highly capricious wants and demands new things but when offered petulantly refuse it. Overtly snappish cannot give a civil reply.

Cina:  A marked feature running through this remedy is touchiness. He does not even want anyone to look at him. Very cross, irritable, ill-humored child. In anger they may indulge in head banging, biting and another such violent behavior. Very obstinate, stubborn like a mule.

Sanicula:  Sanicula children are very headstrong, obstinate, their cry and kick others in anger. Very cross, irritable with changeable moods. They sweat profusely, especially on head and neck. Very restless, jump from one activity to another.

In the above-described case, a dose of Tuberculinum 10M was given followed by Cuprum Sulph 1M.  His aggressiveness now reduced, he stopped beating others, and his sitting tolerance improved. Though occasionally he has anger outbursts they are controlled.