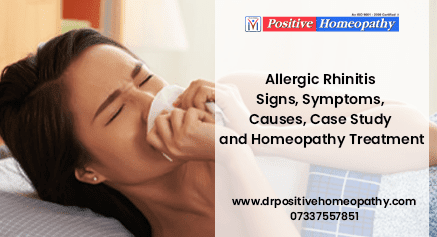 Mrs. M visited our clinic about a year back. She entered the clinic chambers with a bout of sneezing and sheepishly apologized to the doctor and stated “What to do Doctor? Any slight change in temperature makes me sneeze badly. My eyes start watering, my head hurts and feel quite distressed. Daily I take Cetrizine tablet, feel better for some time but again the problem comes back. My eyes have developed dark rings around them and I feel tired always.” Mrs. M was suffering from Allergic Rhinitis.

What is Allergic Rhinitis?

As its name suggests, it is an allergic reaction mainly involving nasal mucosa (rhino=nose, it is=inflammation). As we are all aware allergies are nothing but a misdirected immune system. To protect our body from various harmful substances our body has an amazing defense mechanism which includes sneezing and cough reflex. But in a few this protective mechanism becomes an overenthusiastic causing problem to the individual.

How does Allergic Reaction occur?

An allergic reaction is stimulated when a person is exposed to substances known as allergens which trigger this reaction. In many cases, the allergens are commonly fond of household substances like dust mites, pollen, dander, perfumes, strong smells, change in temperature, etc. For some, it may be a perennial problem while in some it may be seasonal like hay fever.

The immune system of our body acts as police. Whenever any intruder (any foreign substance) enters our body, it becomes alert and releases certain chemicals and antibodies for protection.  The antibodies thus generated are also known as immunoglobulins and they are many such immunoglobulins produced by our body for protection. These antibodies may have short term or long-term memory. Whenever the same intruder (antigen) enters the body the antibodies which were produced earlier come into action.  In allergy-prone persons, a particular type of antibody known as IgE is released whenever the person is exposed to an allergen. The more a person gets sensitized to the allergen more is the release of IgE antibody which in turn produces inflammatory chemicals and cells like histamine, basophils, eosinophils, and mast cells which are responsible for the allergic reaction.

What are the risk factors for Allergic Rhinitis?

Allergic rhinitis is neither gender-specific nor age-related. Both males, females, and any age group may develop allergic rhinitis. Why it occurs in few individuals is not known but common risk factors identified are a family history of asthma, urticaria or other such allergies, exposure to smoke, chemicals, and other pollutants, living in damp, poorly ventilated dwellings, those who have been switched over to top feed quite early, being overweight, having pets at home or living in areas with lots of trees and bushes.

What are the symptoms of Allergic Rhinitis?

The most common symptoms of Allergic Rhinitis are:

Severe cases of allergic rhinitis can cause headaches, fatigue, dark circles, and bags under the eyes, sinusitis, ear infections, skin itching, and breathlessness. 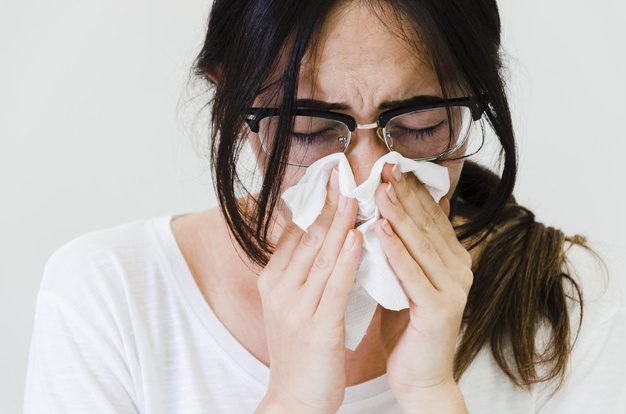 What is the treatment for Allergic Rhinitis?

Though Allergic rhinitis is usually harmless and self-limiting it can affect a person’s quality of life. It is one of the reasons for absenteeism in the workplace. Treatment is mostly episodic base and people are also advised to avoid the exposure to allergens. For persons prone to allergic rhinitis they may be encouraged to use pollution masks when out, avoid pets at home, and may use HEPA filters to purify the air.

Conventionally when a person suffers from an episode of allergic rhinitis they are administered antihistamines and to nasal decongestants in the form of nasal sprays or drops and steroids may be administered. In severe cases, the allergens for which a person is allergic are identified and the same is given to the individual in the form of injections or sublingual tablets to work in a similar manner as vaccinations. But all of them have their own inherent limitations and side effects. Regular exercise, intake of Vitamin C and Vitamin D, breathing exercises, keeping the rooms well ventilated, ensuring no molds on the walls can help to some extent in reducing allergic rhinitis.

Homeopathy treatment is aimed at alleviating acute symptoms, reducing the frequency of attacks, correcting the immune response, and improving quality of life. There are many remedies in homeopathy which can help in both acute conditions as well in chronic conditions. Medicines are selected based on patient’s acute picture, trigger factors like some may have bouts of sneezing as they slightest change in temperature, other might react when they come out of a room or enter into a room, etc., person’s mental makeup, his likes/dislikes, etc.  Thus, a selected remedy, also known as Constitutional remedy, helps to desensitize the cells, regulate immune response, reduce severity and frequency of attacks, and helps to cure allergic rhinitis thereby improving quality of life.