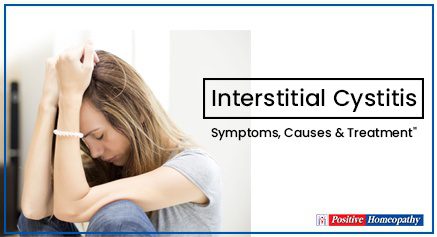 “Health is wealth!” as the saying goes. But there are several diseases which may affect the health of an individual. One such disease which causes not only discomfort but also embarrassment is interstitial cystitis, also known as bladder pain syndrome (bps). As inferred from its name, it is a condition affecting urinary bladder and to be diagnosed as interstitial cystitis a person must be complaining of pain or discomfort in the pelvic region, polyuria or increased frequency of urination both day and night, with a constant urge to urinate and marked urgency for a period of six weeks or more without any other underlying pathology. Though the symptoms resemble that of urinary tract infection it is not so, there is no infection found. A severe condition of interstitial cystitis affects the quality of life of the person and can lead to depression. Learn more about interstitial cystitis homeopathy in this article.

Causes:   The urinary bladder is like a balloon which can expand and when full we feel the pressure and micturate but due to some reasons the bladder is unable to hold the urine. Why this ability is lost is not clearly understood but could be due to an autoimmune reaction, by which the bladder cells are attacked by the immune cells. This theory is supported because of other associated auto-immune disorders found in the patients suffering from bps like Sjogren’s syndrome, Irritable Bowel Syndrome, etc.

Other causes attributed towards interstitial cystitis are trauma/injury either to the bladder, spinal cord or pelvic floor muscles; or improper functioning of pelvic muscles, nerve irritation or inflammation, chronic inflammation of the bladder. In some the elasticity of the bladder muscles are lost with age or sensitivity to nerve stimulation is lost due to overstretching the bladder.

Risk factors:  Gender and age seem to play a role in this disease with women above forty years of age being more prone to it than male. Existence of other autoimmune disorders, hypertension, atherosclerosis, and other vascular disorders can increase the risk of interstitial cystitis.

Symptoms:  The main symptoms of interstitial cystitis are:

How To Get Rid of Interstitial Cystitis With Homeopathy Treatment?

Homeopathy Treatment for Interstitial Cystitis:  The treatment with homeopathy is based on individualization of the patients based on their mental, physical, emotional symptoms. The medicines help to control the symptoms of interstitial cystitis and helps in improving the quality of life. Homeopathy, as a system, believes in treating the patient and not the disease, however, given below are few important medications which may help in interstitial cystitis.

Equisetum hyemale:  A small remedy but very useful in interstitial cystitis. There is a severe, dull aching pain in the bladder region not ameliorated by urinating. They suffer from frequent and intolerable urge to urinate with severe pain at the close of urination. Constant desire to urinate, a large quantity of clear, watery urine without amelioration.

Apis Mellifica: A well-known remedy for renal problems. There is incontinence of urine, and when passed there is a severe burning sensation, especially the last drops.  Edema of the body with puffy face and bags underneath the eye.

Sarsaparilla: It is indicated in dark-haired persons with lithic diathesis. Urine bright and clear but irritating, often and copious; painful distention and tenderness of bladder; urine dribbles while sitting. Severe or unbearable pain at conclusion of urination. Ineffectual urging, urging with constipation.

Uranium Nitricum:  Another important remedy for BPS. Copious urination both day and night. Incontinence of urination; unable to retain urine without pain. Urine pale, milky with a fishy odor.