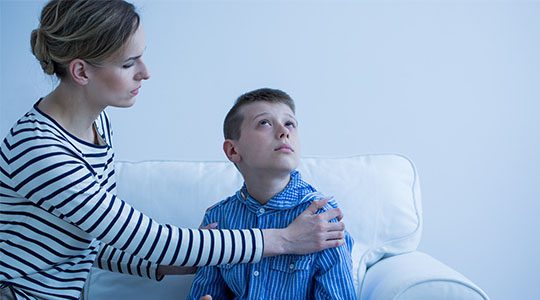 Are there any treatments for Autism? Homeopathy Treatment For Autism!

Would my child ever call me ‘Mamma’? Cried Mrs. Paul*. John** was more than 3 1/2 years old and was the only child to his parents. When he was born five years after married life the parent’s happiness knows no bounds. John was delivered by C-section and apparently, everything was normal until John was 18 months old when it became obvious that he was not like any other kid. The usual social response to calls was absent; there was no eye contact and whatever few words he was babbling earlier also stopped. When John was diagnosed to be Autistic by the pediatricians, the world around them seems to have collapsed. Parents consulted many doctors; put him through various therapies and diet but they did not get any sustainable result. Finally, they visited our clinic after watching Dr. A M Reddy’s video talk on Autism and Homeopathy as the last hope. They had many questions in their mind, would homeopathy work when other systems seemingly failed. Here it is important to understand how homeopathy system works.

Homeopathy is a comparatively young system which believes that no two individuals are alike. Its medications are selected by careful individualization based on a person’s mental, emotional, physical symptoms including desires, sleep pattern, family history, birth history, vaccination history, reactions to any external stimulus like sound, music, light etc. and careful observation of body language of the patient. A complete case history on homeopathy pattern was taken and Calcarea Phos 10 M was prescribed. Calcarea Phos was selected based on the child’s desire for eggs and salt, history of frequent colds and cough, head sweat and physical structure and was asked to come after 15 days. When they visited the clinic after fifteen days, they reported that there was not much change in his behavior though now appetite seems to have improved and the bowels became more regular. As physically there was some improvement medication was not changed and now was asked to come after one month.

Next visit when they came, mother complained that John seems to have become more mischievous though they were happy that he sees to be babbling few words. From then on they were on the regular visit every month to the clinic and we could assess the change in John. His speech became clearer, eye contact improved and sitting tolerance was developed. After six months of treatment, it was advised to admit John in a school. It is now more than a year since the treatment started and changes noticed in him are remarkable. He now addresses his parents, he is sitting calmly in the school, eye contact improved and he is now responding to simple questions though he does occasionally show excitement and sometimes appear to be lost in his own world. John continues to be in our treatment to sustain the development shown by him. Here it is important to remember that the response to treatment varies from individual to individual, while some kid’s response is very quick in some it may take months to bring about some change, but on the whole, it is noted that early the intervention better is the result.
Now let us discuss what Autism is and how to recognize the early signs and symptoms of autism and how homeopathy can help.

Autism is a developmental disorder affecting the child’s social and communicative skills along with restricted and repetitive behaviour. The symptoms can range from mild to severe form and to cover this wide range of symptoms the word “spectrum” has been added to it and is now known as Autism spectrum disorder or pervasive developmental disorder. Though the first signs of autism may begin as early as six months of age the signs and symptoms are usually noticed by the parents when the child is two to three years of age and boys seem to be more affected than girls.

Unfortunately, the exact cause for Autism is not known but several risk factors have been identified. Among them, the primary reason could be genetic. It has been observed in many studies that genes play a strong role in developing Autism. Fragile X syndrome and other chromosomal abnormalities, Down syndrome have been found associated with Autism.

Besides genetic factor mother’s health during pregnancy like the age of the mother, thyroid, gestational diabetes, exposure to certain infections and drugs, emotional stress, smoking, drinking are also considered as risk factors.

Nature of child’s birth like delayed labor, aspiration of amniotic fluid or meconium by the neonate, premature birth, birth injuries, delayed birth cry also play a role in developing autism. Besides these factors they are other factors like vaccination, certain allergies like gluten and milk allergies, leaky gut syndrome, coeliac disorders, seizures etc. are also been found to be associated with autism.

What are the signs and symptoms of Autism?

Most often parents notice something is wrong with their child as he/she is about 2 to 3 years old. Most often the first thing they notice is the child’s lack of responsive behaviour and poor social interaction along with speech delay in many cases. In many cases, parents may notice a sudden regression inability of speech. The child most often likes to be alone and appears engrossed in their world, act unnaturally stubborn and show behavioural abnormalities like sudden excitements, flapping of hands, jumping, walking on toes, appear fixated with few items only like wheels, a particular toy etc. Socially also they lack eye contact and do not respond to their name call and are unable to relate with their peer group.

The principle behind homeopathy treatment is to cure the person, not the disease. Medications are given after a detailed case taking based on person emotional, mental and physical symptoms along with assessing the birth and parental history and careful clinical observations including observing the child’s behaviour, social and communication skills and his reaction to stimulus. There are many medications in homeopathy for helping in managing Autism. Some of the important medications in Autism are:
• Agraphis Nutans– Mutinism in children unrelated with deafness. Frequent colds and coughs, Adenoid and enlarged tonsils in children.
• Aurum Met– Physical restlessness, always in a hurry, oversensitive, gets anger on least contradiction, absorbed in himself, scrupulous child.
• Bacillinum– Arrested development, usually underweight, irritable child, frequent infections like ringworm etc.
• Baryta Carb– Dwarfish mentally and physically. One of the most indicated remedy in children suffering from Down syndrome. Delayed milestones, weak memory. Lack of circumspection
• Cina– children with wormy complaints. Very cross, irritable child, always whining and throwing tantrums, does not like to be looked at. Canine hunger, feels hungry almost immediately after meals
• Calcarea Phos– Delayed milestones especially walking. Extremely fretful, sluggish mind, wants to be left alone
• Carcinosin– One of the most frequently indicated remedy in Autism. Sensitive, precocious children. Marked restlessness, obsessive, temper tantrums, destructive, fantasies, family history of cancer
• Thuja– Ailments from vaccination. Fixed ideas and routine, slow speech
• Tuberculinum– Fits of violent temper, very restless, changeable mood, history of frequent cold and cough.

As mentioned earlier homeopathy medication is given based on the presenting symptoms, past, birth and family history, behaviour, interaction, etc. Such selected similimum gives good, sustainable result. Clinical observations show early intervention with homeopathy better is the result. The time period, progress and response to treatment varies from individual to individual with some children showing very quick improvement and in some it may take much time. Homeopathic medications besides helping in managing autistic conditions also help to boost the immunity of the child without any side effects.